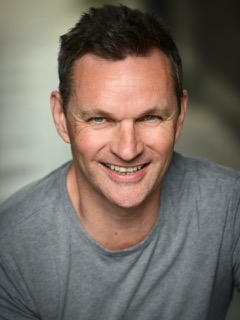 Scott Fleming has been a professional voice and acting coach since 2005. He grew up in St.Ives in Cornwall and left in 1992 to study at ‘Mountview Theatre School’, one of the UK’s leading conservatoires in the Performing Arts.

His first job after graduation was in ‘Buddy’ at The Stand Theatre in the West End. He then played the lead role in Bob Carlton’s ‘From A Jack To A King’, which began life at Plymouth’s Theatre Royal and toured the UK’s Premier theatres for 18 months.

For the last 25 years Scott has worked in all areas of the profession, Film, TV, Radio, Commercial’s, Voice-overs and theatre. He continues to actively work in the business and can be seen regularly in ‘Doc Martin’ on ITV1 where he’s appeared in 3 series’ and hopes to return next year.

Scott is also a composer and songwriter. His composition ‘The Kitchen Door’ won Best Country Song in the UK in 2016 and closer to home he wrote all the original music for Cornwall based theatre company’s ‘Cousin Jack’s’ award winning production of ‘The Mousehole Cat’ which has been performed at Christmas in Cornwall over the last 3 years.

This year, Scott has also gained publishing for a number of his songs in the UK and the US with his music being submitted for use in Film, TV and advertising worldwide.

He returned to Cornwall in 2005 to raise his family. He attended Truro and Penwith College as a mature student to develop his musical knowledge further, achieving a Distinction in the Popular Music FdA and a BA (Hons) in Contemporary World Jazz.

At this time Scott came to know the then head of Performing Arts at Truro and Penwith College and he offered him the chance to become a Vocal Coach to pass on all his experience and knowledge to the young people of Cornwall.

Since then Scott has worked on with Further and Higher Education students in Musical Theatre A Level and Btec courses as well as Pop, Rock, Singer/Songwriter, Folk, Jazz and Blues. He also works privately with people of all ages and backgrounds with experienced performers as well as newcomers looking to find their voice.

Scott has had the privilege to work with some of the best talent you will find anywhere. He has also continued to develop his own skills, as the students are constantly looking to improve and achieve their own goals in the Performing Arts and beyond.

The last 18 months has been most successful by far. Under Scott’s tuition and guidance over a dozen students have gone on to study at leading Drama Schools/Conservatoires and to work in the Profession, whilst others has achieved their own goals of just becoming a better singer for their own enjoyment. This is testament to all the hard work, joy and commitment that the students continue to show.

This year’s pandemic meant that in March 2020, students didn’t sit any Musical Theatre Exams but March 2019 saw the best results yet from the work done by the students.

The 16 students that entered achieved 15 Distinctions and 1 Merit, most final marks being in the 90 -95% bracket with one candidate achieving 97%. In fact in that exam, after that particular student finished her last song, the L.C.M. University of West London External Examiner commented, “That was industry standard”.

Scott has been preparing students for Musical Theatre and Rockschool exams for the last 15 years with a 100% pass rate with the average pass mark increasing year on year.

Scott also works extensively with students on audition technique where required, giving them the best chance of success in gaining a place at Drama School where the competition is fiercer than ever.